We have an attic.
A real attic with a sort of hidden door on the bend of a stairway. Access is not easy you need the sort of agility found only in tomb raiders, or sprightly grandmothers. Until you climb in you have no idea that it leads to a huge space with a window that looks out over the roofs of the town. Because it is big it has become a repository of anything we don’t want to throw away. It contains old furniture, children’s toys, suit-cases, loads of books and of course boxes and bags full of old papers. Because access is difficult stuff goes up but rarely comes down.

Isobel had been rootling around in this attic on some quest for old accounts and, by chance, came across a box full of old Convention programmes and newsletters. This was certainly much more interesting than old numbers so she brought it down and we delved into the dusty pile. It was full of history and each booklet was so larded with memories of conventions and the people that made them we both thought it worth sharing. Some people reading this will have been to them all. Old campaigners like us who can sit around and chew the fat over those early years, dunking memories in nostalgia like biscuits in tea.

The first ever Discworld Convention was in 1996, when the world was young and Alzheimer’s happened to someone else, not your best friend.
In 1996, dear reader, the Spice girls made their breakthrough, there was a breakup by the boy band ‘Take That’. The royal family had a divorce and, although we didn’t know it at the time, our prime-minister, John Major, had been shagging Edwina Curry the junior health minister. By 1996 Terry had published twenty books and was the top selling and highest earning UK author that year.

The convention took place in Sacha’s Hotel in Manchester from the 28th to the 30th of June and was a truly international event. The guest of honour was one Terry Pratchett and also attending were Stephen Briggs, Colin Smythe and Josh Kirby. For those who weren’t born then and for the rest of us that have forgotten, on the 15th of June that year Manchester had suffered a particularly destructive bombing by the IRA. The buildings opposite the hotel were boarded up and the police presence on the streets was highly visible. Walking into the brightly lit hotel foyer full of fans, many in costume, from a touch of the blitz outside was an even more unusual transition to Discworld than the one we have become accustomed to.
The committee was headed by a fan whose non-de-plume ‘the bursar’ didn’t do justice to his level headedness and organisational abilities. (In fact it was Paul Kruzycka aka Paul Rood, now older and wiser and a purveyor of very fine Discworld Beers) The idea was first mooted as a fan gathering of a few dozen like-minded individuals who would, in the name of pTerry, enjoy harmless fun in some pub back room. But once you kick an idea like this into the great gumbo of fandom it’s inevitable that a lot of people will want to take up a spoon and enjoy sharing it. And so from being something small and simple it grew into something quite major.

Many of these fans hung around on a street corner of the world-wide-web in a news group called alt.fan.pratchett. Although 1996 was not at the dawn of the www it was certainly just after breakfast or at least before lunch! It was in this forum, littered as it was with some seriously clever and ingenious reprobates, that the plans for the convention grew. They knew no fear, were used to doing strange things in unlikely ways and were as artful as a bunch of monkeys. They were ‘up for it’ and made it happen – bless em all! And there was ‘L’ space –after the UU library – which still acts as a repository for most aspects of Discworld fandom.

By 1996 Terry was really into his stride as a writer and from the early 90’s was often producing two books a year. This meant he was hitting the road on a punishing schedule of signing tours where he met hundreds of his readers and fans. His signing queues were huge and I don’t think any popular writer had ever caused so much congestion to pavements and book shops as dear old Terry did in those days. But this convention was the first time that hundreds of people from all over the world shared uninterrupted time with him and with each other. Because it was the first it set the blue-print for all future Discworld conventions. Some of the organisers had been to science fiction conventions so there was a scaffold of sorts with key events like the ‘Maskerade’ and grand dinner and the various workshops being almost universal to any convention.
I seem to remember that the programme included a discussion on ‘The Cannibal Lemmings Theory of Discworld Rotation’ and advice for the “Bring Your Own Custard Packet Appeal”. Various signs around the hotel urged attendees to “Talk about Custard” which must have confused the hell out of other guests.
At the end of the convention the unresisting chairman, Paul, sat in a paddling pool and was covered in custard. This was something that stayed in my memory for longer than I would have liked. It was fabulous and a heady brew that just had to be repeated

And it was, two years later, in the Adelphi hotel in Liverpool.
More of the same; traditions have to be maintained after all and because so much had been learned from the 1996 convention there was a bit more ‘polish’ but still the same manic joy and fun that had made the previous convention so memorable. The Adelphi hotel had featured in a ‘warts and all’ documentary a few months previously which did not exactly show the place in its best light. The hotel was quite a challenge; old, decrepit and with long dark, hot corridors that still seemed to echo with the last goodbyes of those passengers who embarked on the Titanic. A subterranean bar opened on to the street which seemed always seemed to be filled with argumentative men fuelled by drink and looking for entertainment. It was something of a challenge to an old soak like me and certainly a novel experience for some of our younger and more sheltered attendees. After a while people in costume tended to stay away and found alcoholic respite in other places. This convention also had a Gala Dinner, Maskerade, Charity Auction, Guest of Honour Interview, and a plethora of fan activity involving making things out of basically, rubbish. Programme events included, among other things: Two Rampant Hippos and an Incontinent Chimera, Build Your Own Religion, Thogg’s Masterclass – Live! And Quantum Weather Butterflies 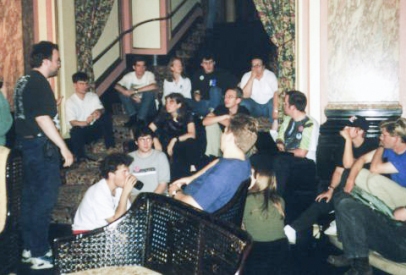 My abiding memory of these two conventions especially is of fans wandering in and out of the large public rooms or just sitting around and chatting. They occupied every inch of space taking up all the chairs, sofas, tables and floor. Being young, they sprawled in that way that only the young and nimble can do, across the chairs, in bundles on the carpet, sitting cross-legged, across legs and wrapped around the walls. Wonderful! It was like some huge wave had deposited all the rare and special sea creatures that had previously swum in disparate oceans on to one beach where they enjoyed the company of fellow travellers and that of their hero Terry Pratchett until, a couple of days later, another wave took them off to their home waters once again.

After 1998, Conventions took on a sort of convention themselves with various chairman and committees who always managed to put their unique stamp on their event. But all the UK DWCons can trace their lineage and many of their customs back to 1996 and Manchester.

So the memories go back in the box and the box goes back in the attic.
One day – hopefully many years hence – one of our children will have to clear that attic, gods help them!

A box full of programs, convention lanyards and memories of some of the loveliest human beings it has been our pleasure to share time on the beach with.
The tide might have gone out, but his imprint is still on the sand, and will be for years to come eh?

There are a few pictures with this thanks to:
Carl Muller, Leo Breebaart and the other ne’er-do-wells who have documented these momentous occasions and the folly’s of their own youth.

If you fancy seeing more – or even how you looked when young have a dib on http://www.lspace.org/fandom/index.html
Where you can follow the story of these and other conventions writ by those who still bear the scars.